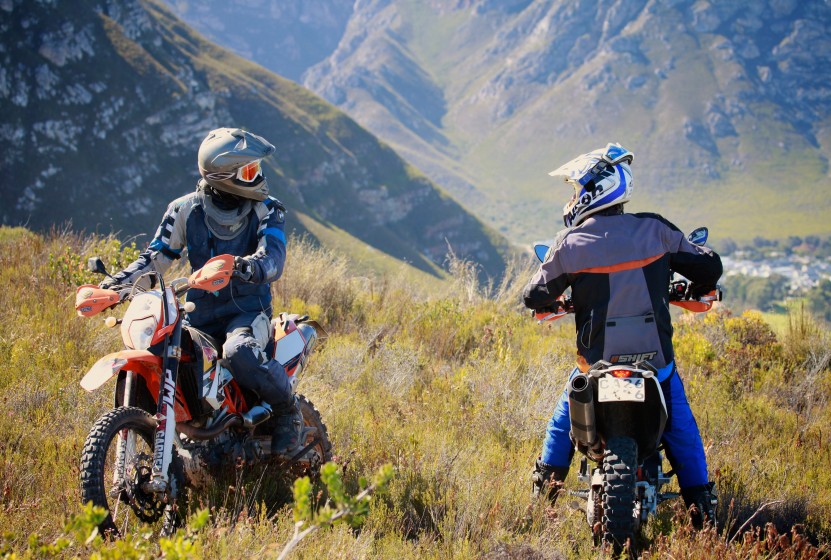 On Holiday in Cape Town………. Want to ride for a day?

Cape Town is attracting us European tourists at the moment, a big country with great weather, food and wine, a fascinating history, friendly people and also a very favourable exchange rate which goes some way to offset the cost of the long flight. There’s lots to do in South Africa, but do not miss the chance to get on a bike and off the tar roads and in to the hills to see the true beauty of Africa.

My wife and I along with some good friends planned a 3 week circular trip out of Cape Town, once we had the dates fixed I searched the internet to find someone that would hire me an Enduro bike for a day and take me out and show me some South African trails. I found plenty of 5-7 day touring bike tours but surprisingly not that many offering one day Enduro riding, which I thought strange given the ideal country side. However, after a little more digging and some emails I had a day organised.

John Wood of Wildwood tours collected me from our apartment in Camps Bay, after a quick hello he gave me the option to ride the tarmac out of Cape Town or drive 35 minutes in the truck to ‘get out of town’. Personally I dislike riding in city traffic so off we went in the truck, which gave us time to chat and for John to find out what sort of riding I was looking for. No Romaniacs, but a challenge I said. I’ve come back to bikes recently and have a done a reasonable amount of riding in the last 2 years, rallying in Europe mainly, competing in Hellas, Serres, Toureg, and Libya Rallies, but it would be fair to say, being one of the more mature riders and talent limited, that I bring up the rear of the field but generally finish. With all that in mind John planned a route. We stopped at a filling station unloaded the bikes got kitted up, John sorted the ‘African’ security for the van and trailer with a few Rand and we were ready to go. We were both on clean and well prepped late 690 KTM’s, the back tyre was well worn on mine but there was no sign of rain so no great worry.

Although I’m not keen on tarmac riding John said the Franschhoek pass was an iconic piece of road and to be ridden, and he was right fantastic views, but you did need to avoid the Baboons. We cracked on leaving the tar behind and on to fast unmade road, caution was needed as I quickly found out that all sorts of vehicles used these roads both ways…. the 690 was just the machine for this sort of going. Soon after we turned off the main trail up a track and across the top of a reservoir where the track was well underwater, wet feet time. After some tracks very reminiscent of the Greek mountains we went off piste in search of a single track route used by mountain bikers which was great fun, a bit tight for the 690 at times, up log ramps over fences, through bushes, more like the Hare & Hound races in the UK without the mud.

We stopped for coffee and regroup in Greyton, a small picturesque town with a tree lined main street. John gave me the option of trails or a mixture single tracks and trails on our next leg to the coastal town Hermanus, single tracks please… We wound our way up and over the ridges, through gullies and past cattle, and the view from the top was staggering. There was no sign of human disturbance as far as the eye could see, something us Europeans are just not accustomed to. We pushed on to arrive above Hermanus with another view to die for, this time the crashing ocean and miles of sandy beaches, but no whales sadly. With a quick late lunch on the beach, a top up of fuel, John said ‘I know this track up the side of a water fall’…. we needed to crack on! The route took us up around the back of a vineyard, after a small adventure off piste we found the track up the ravine, you truly had to just look ahead up the path at times, it was a great section to ride all sorts of odd challenges on the way up. I’m sure the waterfall was spectacular but to honest I didn’t dare look. Time was truly marching on so we dropped down on to the trails again for a 70km blast back to the truck, which the ‘local’ security had kept safe and sound.

After 350km I felt I had a good days riding, as requested nothing silly, and it had given me an insight to the real South African countryside. As we drove back to Camps Bay we chatted about the longer trips up through Namibia that Wildwood run, which all sounded fascinating, but for those of you enduro types on holiday who perhaps can only spare a day away from the family this is really what you should do, a day out with John Wood.